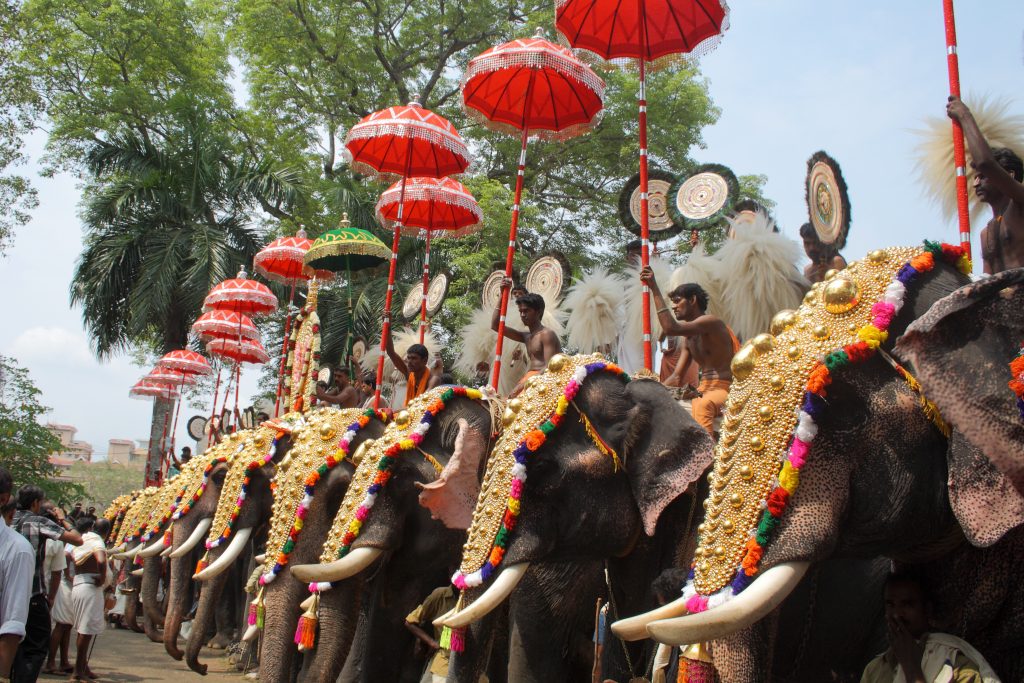 Following the soulful rhythm of Carnatic music in Chennai, through the towering temples of Mahabalipuram and French-influenced avenues of Pondicherry, this 14 day holiday gives you a fascinating insight into the soul of South India. The trip takes you further westwards towards Kerala where you relish the sights of sounds of Cochin, the wildlife of Periyar, and then move northwards towards Karnataka to sip in some tranquillity in the famed hill station of Ooty, then towards Mysore and concluding your trip in the bustling IT metropolis of India – Bangalore.

On arrival in Chennai by your international flight, meet and greet at the airport by our representative and transferred to your hotel. Afternoon your appointed guide will take you on a sightseeing tour of Chennai. Retaining much of its traditional charm, this 350-year-old city is the gateway to the South, providing many fascinating vignettes of southern heritage. You will be visiting The Cathedral of Sam Thome – the last resting place of St. Thomas the Apostle who brought Christianity to India in 52 AD and the Fort George – where most of Chennai history was written are focal points of visit. The St Mary’s Church in the Fort was built in 1678 – 80 and Robert Clive was married in this church in 1753. Also, visit some of the temples, the most important being the Kapaleeshwara temple – a 7th-century temple dedicated to Goddess Karpagambal or ‘Goddess of the Wish-Yielding Tree’. The goddess is one of the forms of Parvati, Lord Shiva’s wife.

Today morning we drive west to visit the temple city of Kanchipuram (1.5 hrs). The temples of Kanchipuram are torchbearers of the glorious heritage of the Kanchipuram District and are repositories of the magnificent art forms that evolved over several centuries. The most famous Siva temple at Kanchi is the Ekambareswarar temple. The dimensions of this temple are reflected in its 20 – acre spread and its tall south gopuram which soars to a height of 58.5m. Later drive to Mahabalipuram (1.5hrs) and on arrival check in at a beach resort. Rest of the day at your leisure on the beach.

Today morning your appointed guide will take you on the tour of the UNESCO heritage sites of Mahabalipuram covering Arjuna’s Penance – an enormous relief made on two huge boulders, is the universe itself in stone. This colossus of art, 27 meters long and 9 meters high, is perhaps the world’s largest bas-relief. The Varaha Cave, a small rock-cut Mandapas (hall), is a faceted and finished gem with two incarnations of Vishnu—Varaha (boar) and Vamana (dwarf). Rathas – dedicated to the five Pandava brothers. Out of these, four are carved out of a single rock, while the fifth on the west is scooped out from a small rock. Shore temple – a three-in-one abode of God—a Vishnu temple sandwiched between two Shiva temples—it is a visual pleasure, its precincts abounding in architectural masterpieces. Rest of the day is at leisure on the beach.

After breakfast drive to Pondicherry (2 hrs) en route visit the Auroville – a universal township in the making for a population of up to 50,000 people from around the world. The concept of Auroville – an ideal township devoted to an experiment in human unity – came to the Mother as early as the 1930s. On arrival in Pondicherry, check in at the hotel. Later visit this essentially French-influenced town of Pondicherry. By the 18th century, this tiny fishing village had turned into a grand port city. The French first set foot here in 1670 and left a part of them when their undisturbed rule finished in 1954. Not much has changed since. The Sri Aurobindo Ashram located on rue de la Marine, is one of the most well known and wealthiest ashrams in India, with devotees from India and all over the world flocking to it for spiritual salvation. Its spiritual tenets represent a synthesis of yoga and modern science. The Ashram was set up in 1926 by Sri Aurobindo Ghose, one of India’s greatest philosopher-poets, who originally came to Pondy to escape persecution by the British.

After breakfast drive to Thanjavur (3 hrs) and on arrival check in at your hotel. Today afternoon your guide will show you around this city covering the Brihadeswara temple dedicated to Nandi, the Bull is a masterpiece of the captivating Chola architecture. The mount of Lord Shiva i.e. Nandi has been made from a single granite rock. Similarly, the dome of the temple rests on one granite rock. Right next to the temple is the Palace that was built by the Nayaks and the Marathas in parts is worth visiting for its magnificent masonry. The Palace is home to the Mannar Saroboji Saraswathi Mahal Library, Art Gallery and Sangeetha Mahal.

After an early breakfast drive to Madurai (5 hrs) on the way visit the Rock Fort temple in Trichy. The rock rises to a height of 273 feet to be climbed by a flight of 417 steps. There are Two Vinayaka (Ganesha) Temples at the foot and the top of the rock respectively and a Temple for Siva in between. Lord Siva is known as THAYUMANAVAR. It means the God who turned Mother. Later drive to Madurai and on arrival, our representative will assist you with your hotel check-in. Rest of the day is at your leisure.

Today morning our guide meets you in the hotel lobby and will show you around this temple city. Situated on the banks of the Vaigai River, Madurai, the ancient capital of the Pandyan Kings, is a sacred place. Legend has it, that the divine nectar falling from the Lord Shiva’s locks gave the town its name. You will be visiting Tirumala Nayak Palace constructed in the Indo Saracenic style in 1639 AD. And the Meenakshi Temple is a superb example of Dravidian architecture and sculpture, the focal point around which the city has developed. Evening attends the temple ceremony at Meenakshi temple. This is a ceremony that takes place every evening at 9 pm when the temple bronze of Lord Shiva is carried to the bedchamber of Parvati. The procession is accompanied by religious prayer and temple music.

After an early breakfast we drive to Periyar (6 hrs) and on arrival in Periyar, you will be assisted by our representative for hotel check-in. Later leave for an afternoon boat cruise on Lake Periyar to watch wildlife. This 777 sq km national park is home to the Asiatic elephants and Royal Bengal tiger along with other animals, birds and reptiles. The boat cruise is the best way possible to explore the park and to watch the wildlife from close quarters. Evening explores the Kumily spice market to see and buy spices if you have already not bought some during the spice plantation visit.

After an early breakfast we drive to Cochin (6 hrs) and on arrival, you will be assisted by our representative for your hotel check-in. Afternoon you will be met by your guide for a tour of Cochin which despite being the commercial hub is a self-assured combination of both the past and the present. It’s the melting pot of history including, Dutch, Portuguese, Chinese and Jewish influence. Chinese fishing nets of Fort Kochi is an unusual form of fishing — shore operated lift nets; St. Francis Church is the oldest European church in India that has great historical significance as a mute witness to the European colonial struggle in the subcontinent. Also, visit The Mattancherry Palace also known as Dutch Palace and the Jew Town including the Jewish Synagogue the oldest synagogue in the commonwealth nations. Rest of the day is at leisure to explore the spice/fish market or to take a sunset cruise in the harbour. Evening you will have an introduction to the traditional dance form of Kerala – Kathakali! This dance form tells you the story from the epics of Ramayana and Mahabharata. It takes a couple of hours for the artists to do their makeup. You will be witnessing their makeup session and see the mortal men transfer into the character they play

Today you have another early start as you would be driving to the hill station town of Ooty (7 hrs). On arrival in Ooty, you are assisted by our representative for your hotel check-in. Rest of the day is at leisure to explore this beautiful South Indian hill town.

After breakfast, you drive to Mysore (3 hrs) and on arrival check in at your hotel. Your guided tour of Mysore would include the Mysore Palace and Vrindavan Gardens. Known as the ‘Sandalwood City of India’, the city of Mysore presents a host of spectacular tourists attractions that can be visited by the tourists. The Mysore Palace is an exponent of the Indo Saracenic style of architecture. Once the residence of the royal family of the Wodayars, the palace still retains the regal air with which the royal family reigned in the Durbar Hall, Kalyana Mantap and the Golden Royal Elephant Throne. The Vrindavan Gardens is situated at a distance of 19 kilometres from the centre of the city. The garden is elaborated with fountains that dance to the sound of music in the evenings. The garden is placed close to the famous KRS Dam that was designed and engineered by Sir M. Vishvesvariah.

After a leisurely breakfast, you drive to Bangalore (3.5 hrs) en-route visit Srirangapatnam – which was made the capital by Tipu Sultan. On arrival in Bangalore, our representative assists you with check-in. Rest of the day is free for you to explore this Information Technology city of Bangalore.

Today morning your guide will take you on the tour of Bangalore also called the garden city. You will be visiting Vidhana Soudha – The legislative House of the State of Karnataka, this granite building was built in 1951 to 1956. Bangalore Palace – It was constructed by the Maharajahs of Mysore. For many years the building was neglected as a tourist Attraction but is now open to the public. Cubbon Park – On a grassy expanse over a few hundred acres in the centre of Bangalore is Cubbon Park, planned and laid out in 1864 by Sir Richard Sankey, the then Chief Engineer of Mysore. Lalbagh – Surrounding one of the towers erected by Kempe Gowda, the founder of Bangalore, is the 240 acre landscaped Lal Bagh gardens. Haider Ali, the warrior-king of Mysore, decided to create this garden in 1740 on the lines of the Mughal Gardens that were popular during his time.

In time you will be transferred to the international airport to board flight for your onward/return journey. 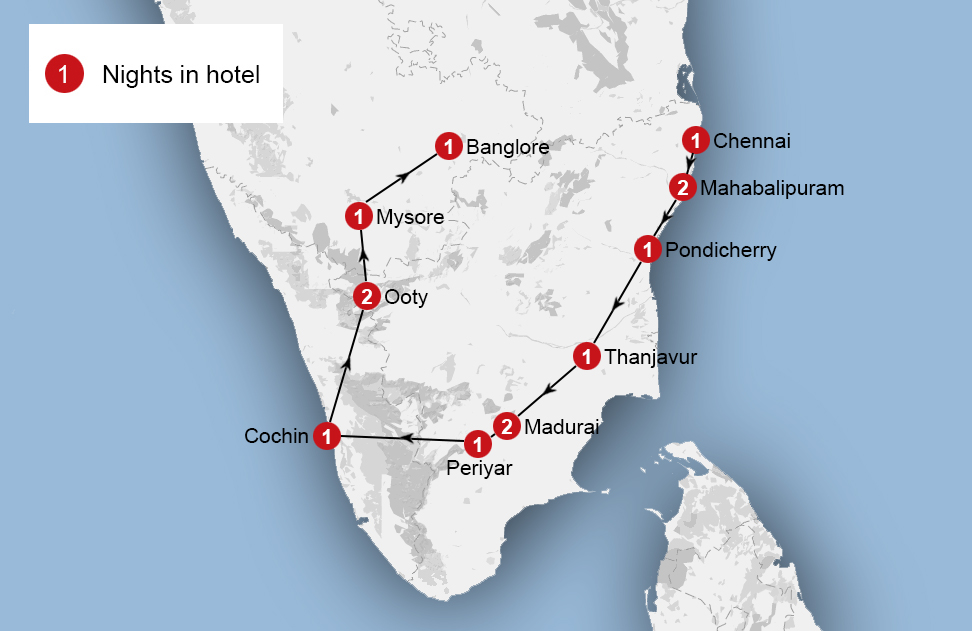